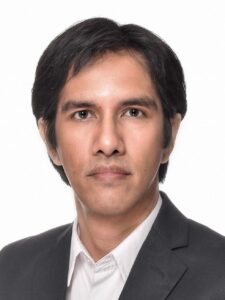 Dhaniel Ilyas obtained his bachelor degree in economics from Faculty of Economics and Business, University of Indonesia (FEB UI) in 2000 and his master of science degree in Econometrics from Universiteit van Amsterdam (UvA) in Netherlands. He started to work at the FEB UI in 1999 as teaching assistant and two year later in 2002, he joined the Institute for Economic and Social Research (LPEM FEB UI) as a research assistant. In 2004, he is promoted to permanent position of Junior Research Assistant and finally as Junior Research Associate in 2007 until now. He is also a permanent lecturer under Department of Economics, Faculty of Economics and Business, University of Indonesia since 2006. His research interests are Industrial Organization, Applied Econometrics, Forecasting, Macroeconomics, Development Economics, Small and Medium Enterprises and Spatial Economics.

He also has worked as (non-permanent) lecturer at University of Al-Azhar Indonesia (2003) and Catholic University of Atmajaya (2003-2004). Dhaniel has published academic articles in several local journals such as Jurnal Ekonomi dan pembangunan Indonesia and Economics and Finance in Indonesia (EFI). He also has conducted research projects on various economic issues such as study on Estimating the Impact of Competition in Text Message Service to Consumer Welfare in cooperation with KPPU (Business Competition Supervisory Commision) and JICA (Japan International Cooperation Agency) in 2010, study on Micro-Demand Survey of Telecommunication Product in cooperation with Infomedia Telkom from 2011 to 2012, and study on Middle Term Local Government Development Plan’s (RPJMD) Academic Draft of Bekasi Regency for BAPPEDA of Bekasi Regency in 2016.