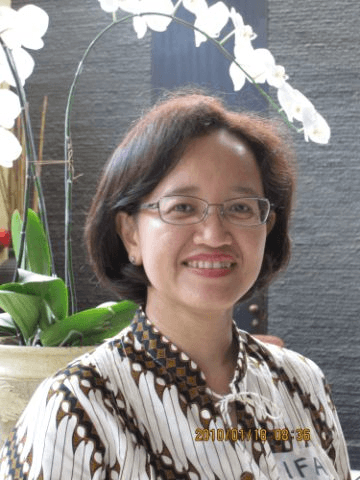 Isfandiarni obtained her bachelor degree in economics from the Faculty of Economics and Business, Universitas Indonesia (FEB UI), and a Master of Arts in Economic Program from the Georgia State University in Atlanta. Isfandiarni has been a researcher at LPEM FEB UI since 1997. Additionally, she serves as teaching assistant at FEB UI for mathematical economics course since 1998. Her main interest is public economics. She also has interests in spatial economics and development economics. She is currently pursuing PhD degree at VU University Amsterdam.

Among the research projects Isfandiarni has undertaken are a survey of the global economic impact on Indonesia’s investment climate (MICI) with World Bank in 2010, a study of the impact of increasing basic electricity tariff on inflation and industry competitiveness for the State Electricity Company in 2010, and a study titiled “Population and Economic Recovery in Coastal Aceh: Aid and Village Institutions” with Brown University in 2009.