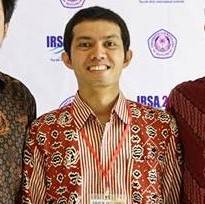 Hanri held positions as consultant and researcher in several institutions such as the Directorate of Regional Autonomy of the Ministry of National Development Planning (BAPPENAS), National Economic Council (KEN) Republic of Indonesia, The World Bank at Washington D.C. Headquarters Office, ESRC for Population Change at the University of Southampton, as well as an individual consultant in various institutions. Academically, he served as a tutor in the Department of Economics, Faculty of Economics, University of Indonesia (FE UI) and in the School of Social Sciences, University of Southampton. He also holds a position as a home-based lecturer for the Master of Economic Planning and Development Policy Program, Faculty of Economics and Business, University of Indonesia (MPKP FEB UI).

His research interest includes Labour Economics and Migration, Development Economics, Education Economics, Social Protection and Poverty, and Applied Economics. In those areas, he has presented some of his works in conferences in the Americas, Europe, and Asia.